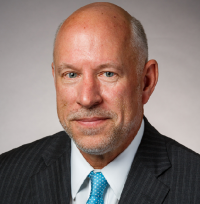 Terry most recently served as the President & CEO of The Chicago Community Trust, one of the nation’s leading community foundations with assets in excess of $2.6 billion and grant making over $250 million annually. He was selected in 2004 as the sixth executive in the Trust’s 100-plus year history. During Terry’s tenure, total assets more than doubled, annual grant making increased fourfold and annual contributions increased six-fold to reach $300 million in the last two years of his term. At the center of Terry’s leadership was his commitment to diversity, inclusion and equity in the Trust’s grantmaking spanning the arts, education, economic development, health and housing.

Terry joined the Trust in 2001 as Director and Senior Program Officer for the Education Initiative where he led the design and implementation of their $50 million, five-year commitment to support literacy, teacher and principal quality and the creation of new schools in Chicago. He applied this knowledge of organizational change he gained from nearly 20 years of experience in public school systems across the country including Baltimore, Oakland and San Francisco. While at the Trust, Mayor Richard M. Daley appointed Terry to serve as interim CEO of the Chicago School System during a leadership transition.