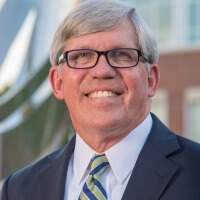 As a result of his work in higher education over the last forty years, as well as his service on state and national boards and committees, Dick Wilson has considerable expertise in the areas of strategic planning, board governance and decision-making, and executive leadership development.

He recently completed an eleven-year tenure as President of Illinois Wesleyan University. During his presidency, he led two strategic planning efforts, strengthened the University’s financial position in a very challenging economic time, and conducted the largest fund raising campaign in the school’s history.

In that role he was part of the leadership team for Campaign Illinois and led campus efforts resulting in $1 billion in private support.

Dick earned both Master’s and doctoral degrees in higher education from the University of Michigan. His bachelor’s degree and honorary doctorate are from Alderson-Broaddus University in West Virginia. He is a member of both Phi Beta Kappa and Phi Kappa Phi national honor societies.

He has been very active in serving community and professional organizations at the local, state, and national levels. This commitment is reflected in his work as chair of the Federation of Independent Illinois Colleges and Universities, board member of EIIA (an organization providing insurance and risk management services for colleges and universities), and member of the National Association of Independent Colleges and Universities’ Committee on Accountability.

Dick also has chaired the College Conference of Illinois and Wisconsin Council of Presidents and served on the Division III Membership Committee and the President’s Advisory Group of the NCAA. His service to the community has included board membership on the McLean County Historical Society, Co-Chair of the Red Cross Evening of Stars, and member of the McLean County Chamber of Commerce, Economic Development Council, and Achievement Gap Task Force.