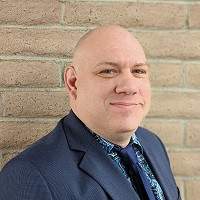 Salem, MA — Dakota Russell, a leader in the museum and historic sites community, has been appointed Executive Director of The House of the Seven Gables Settlement Association. He brings over 20 years of experience in management, interpretation and preservation, and a commitment to ensuring that the diverse viewpoints and stories of marginalized groups are better represented in the cultural landscape.

Most recently, Russell has been Executive Director of the Heart Mountain Wyoming Foundation, an organization that works to preserve the historic structures and artifacts on the site where Japanese Americans were unjustly incarcerated during World War II. In this role, he coordinated a $5 million capital campaign to add a new wing to Heart Mountain’s museum, began the rehabilitation of the camp’s last surviving buildings, and managed national and international outreach. During his tenure, Heart Mountain became a national leader in educating the public about the wartime incarceration of Japanese Americans and the importance of preserving liberty and civil rights for all Americans.

One of American’s most beloved historic homes, The House of the Seven Gables was built on Salem Harbor in 1668 by merchant and ship owner John Turner. In 1910, Salem philanthropist Caroline Emmerton restored the house and opened it to the public as a museum, using proceeds from ticket sales specifically to fund settlement work that benefited immigrant families. Over a century later, The House of the Seven Gables Settlement Association is dedicated to continuing Emmerton’s preservation, community enrichment and educational efforts. For more information, visit https://7gables.org/.