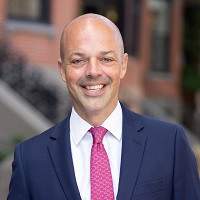 Most recently, Hinds represented the Berkshire, Hampshire, Franklin and Hampden District in the state Senate. A former aide to U.S. Representative John W. Olver and leader of two Berkshire County social service organizations, Hinds also served with the United Nations and was based in Baghdad working to resolve territory disputes in Jerusalem as part of the Middle East Peace Process and to remove Syria’s chemical weapons program.

In the Massachusetts Senate, Hinds served as chair of the Joint Committee on Revenue and of the Senate Committee on Reimagining Massachusetts Post-Pandemic Resiliency. He was also an active member of committees overseeing redistricting, intergovernmental affairs, and racial equity, civil rights, and inclusion.

The Edward M. Kennedy Institute for the United States Senate is dedicated to educating the public about the important role of the Senate in our government, encouraging participatory democracy, invigorating civil discourse, and inspiring the next generation of citizens and leaders to engage in the civic life of their communities. Visit www.emkinstitute.org.