The Largest Nonprofits in Each State 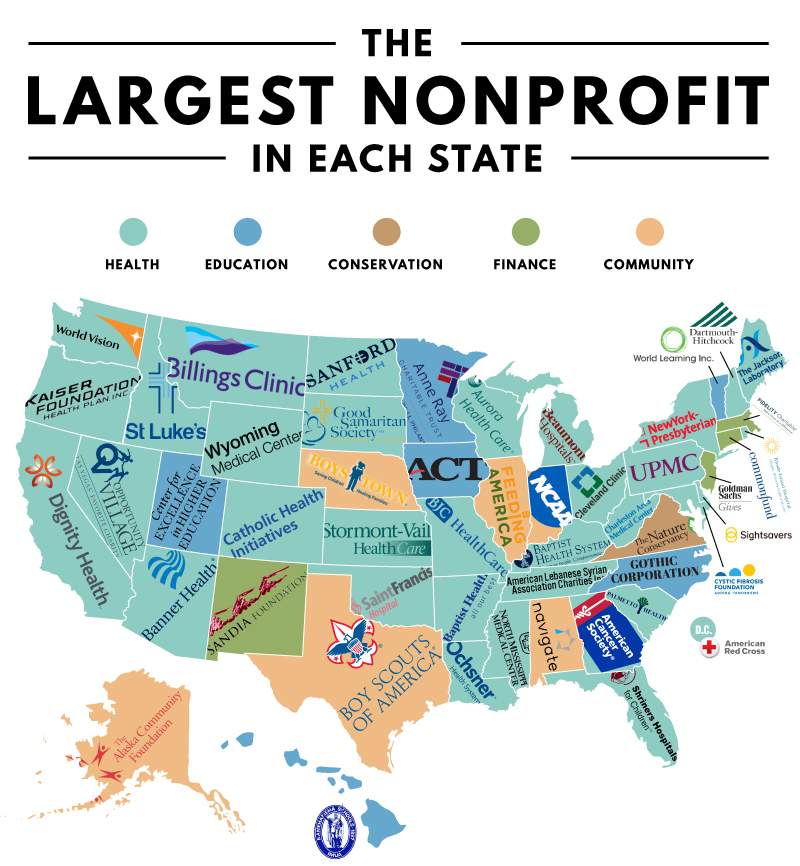 There are over 1.5 million registered nonprofits in the United States, according to the National Center for Charitable Statistics. This remarkably large number consists of public charities, private foundations, and other entities like chambers of commerce, volunteer-run organizations, and other civic leagues.

We know nonprofits are formed to make a change in a local community or for public benefit, but they are also a large force of the American economy, accounting for 11.4 million jobs and 10.3% of all private sector employment according to the Bureau of Labor Statistics.

Of course, just like any other business, registered nonprofits come in all different sizes and have been created for various causes and visions—but what are the biggest nonprofits in each state? We pulled together nonprofit data from all 50 states and Washington D.C. to find the answers to these questions and more.

It turns out that health organizations not only represent most of the states’ largest nonprofits, but they also make up the top five biggest nonprofits when looking at all of the data from this study combined. Coming in at number one is the Kaiser Foundation Health Plan Inc. in Oregon, established in 1955, which has total receipts amounting to a $66,889,601,170. California’s Dignity Health is behind it, but with significantly less total receipts, which amounted to $10,283,716,874.

Many of these large nonprofits have been long established, with a majority of them having a founding date in the 20th century (the oldest being The Billings Clinic in Montana, dating back to 1925). But there’s still plenty of room for the younger nonprofits at the top, with the youngest nonprofit, Sanford Health in North Dakota (established in 2011), coming in at #19 on our list with total receipts of $3,413,720,012.

To learn how we partner with nonprofits, click here.