CEO's with the Greatest Impact on Growth

The top 50 CEOs are heads of some of the most powerful, popular, helpful, and necessary facets of modern life. From smartphones to health care, and science to social media, we ranked the CEOs who have had the greatest impact on company revenue throughout their tenure. Check out the graph below to see how they stack up. 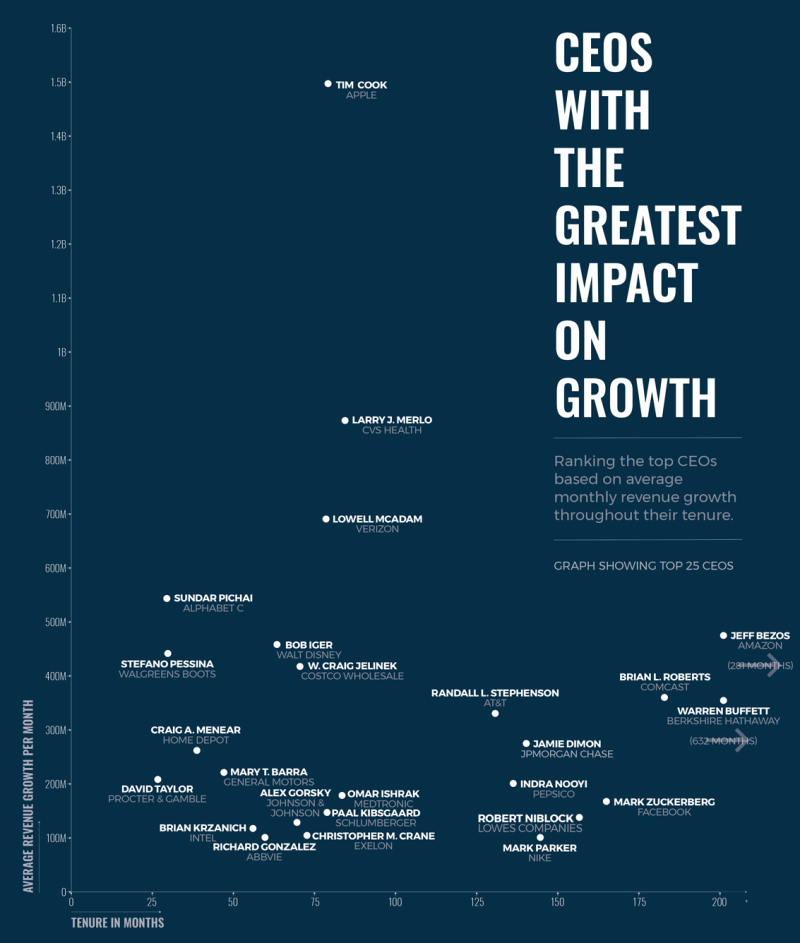 Looking at the graph, you might notice the impressive trajectory of Alphabet and its CEO, Sundar Pichai. In October of 2015, mega-company Google broke into several subsidiaries of varying categories, and Alphabet is the parent company of them all. In just over two years since the reorganization, Pichai has grown the “new” company by an average of $546 million per month. Turns out that a little house cleaning can clear the way for more growth. 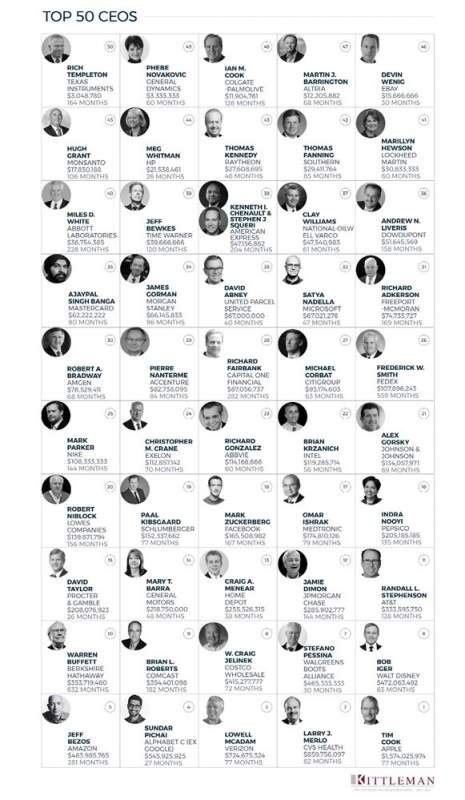 After studying the graph and the ranking, it’s interesting to see that 24 companies out of 50—nearly half—saw revenue impacted when the CEO was approximately 4 to 8 years into the position. This tells us that once a CEO settled into the job, assessed what was working and what areas needed improvement, and put plans in place for growth, the company saw noteworthy revenue impact.

Of the top 50 companies in which the CEO has had a major impact on company revenue, there are five that are helmed by women. Four of which—HP, Lockheed Martin, General Motors, and General Dynamics—grew significant revenue in five years or less. Mary T. Barra, CEO of General Motors, can boast an average $218 million growth per month in just 48 months. Considering the 110-year-old company filed for bankruptcy in 2009, it’s an impressive turn-around.

Many successful companies have been tweaking and refining their brand and products for years, such as FedEx and Berkshire Hathaway, which CEO Warren Buffet has been steadily growing for nearly 53 years (632 months). By diversifying the companies and subsidiaries that Berkshire Hathaway owns and operates, Buffet proves that slow and steady can continue to reap profits for his massive company.

Lest we forget the obvious, Tim Cook, CEO of Apple Inc., is perched high above the other 49 top CEOs, with an average monthly growth of nearly $1.6 billion throughout the 77 months Cook has been at the head of the table. While much of his success stems from constant innovation, breakthrough technology, and attention to branding and customer needs, we also know that that Cook’s No. 1 spot can be attributed to the ubiquity of Apple products and services, as well as owning the lion’s share of the market when he stepped in.

How do CEOs of nonprofit organizations compare to our list of for-profit companies? In terms of revenue growth for nonprofit organizations, St. Jude Children’s Research Hospital’s James R. Downing is at the top of the list. Downing took the helm of the pediatric treatment and research facility in July 2014. Since then, he has grown the facility’s revenue by an average of $8.977 million per month.

Whether built on their own, or by standing on the shoulders of significant predecessors, modern CEOs of the top 50 companies as well as nonprofit organizations are continuing to create, innovate, and market the products and services that people live on and rely upon.

There are no comments yet. Be the first to add a comment by using the form below.