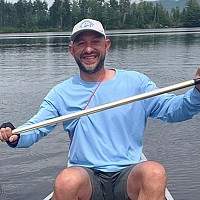 Bar Harbor, ME — Conservation leader Eric Stiles has been named President & CEO of Friends of Acadia, an organization that preserves, protects, and promotes stewardship of the natural beauty, ecological vitality, and cultural resources of Acadia National Park and its surrounding communities. With over two and a half decades as a leading conservation advocate, Stiles brings a deep commitment to environmental and social justice issues and a passion for preserving and protecting parks and natural areas.

Stiles is currently President and CEO of New Jersey Audubon—the state’s leading and largest conservation organization—where he has held leadership roles for 21 years. During his tenure as President and CEO, NJ Audubon has grown its philanthropic resources annually through increased corporate, foundation, and individual support and rededicated its efforts to deliver conservation at the local level, resulting in more direct mission impact. Key accomplishments under Stiles’ leadership also include the passing of permanent multi-billion-dollar funding for state open space and farmland preservation; initiating and leading a four-state Coalition for the Delaware River Watershed that secured nearly $100 million in federal funding for water and habitat restoration projects; and leading international efforts to save endangered shorebirds migrating through the Delaware Bay.