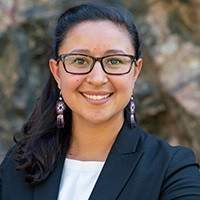 Denver, CO – Chela Garcia-Irlando has been named as the inaugural Executive Director of the Next 100 Coalition. She will lead the Coalition in its work to connect, amplify and support the leadership of historically excluded communities in the administration and stewardship of public lands, waterways and oceans to advance community prosperity and resilience.

In her most recent role, Garcia-Irlando was the Executive Director of the Colorado Democratic Latino Caucus, supporting 14 Latino state legislators in their efforts to represent and uplift Latino voices in the Colorado state legislature. Previously, she served as Director of Conservation Programs at the Hispanic Access Foundation. In this role, she oversaw the organization's national conservation program to build Latino stakeholder engagement in protecting natural resources, accessing the outdoors, and building a Latino environment narrative.

Earlier in her career, she was the Campaign Manager for Serena Gonzales-Gutierrez's successful primary bid for Colorado's House of Representatives, District 4. Prior to that, as the Colorado Regional Coordinator for Latino Outdoors and Ambassador for Brown Girls Climb, she has fueled her passion for creating environmental stewardship and healthy communities.

The Next 100 Coalition was established in 2016 as a collaborative national network of BIPOC leaders from community-centered conservation, outdoor recreation, environmental education, public health and environmental justice organizations. Together, the Coalition works toward a shared vision of a more diverse and inclusive lands and ocean conservation movement.